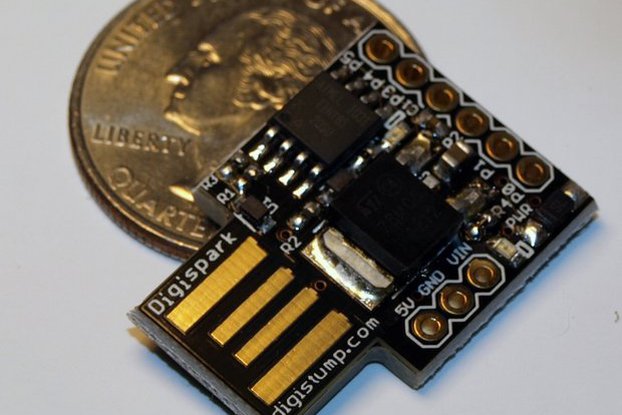 Digistump is a family owned and operated business in the Portland, OR Metro Area. Erik Tylek Kettenburg and his lovely wife Jenni operate Digistump from Washougal, WA - where they live with their horses, dogs, and other farm animals.

We also have a pretty active community on our message boards at digistump.com/board ready to answer these kind of questions, and help out in general.

Thanks again and we'll continue to work to improve our documentation!

The Digispark is a great little microcontroller board that can be programmed via USB and that can also act as USB device to interface your own circuits with a computer (examples include a Cheerlights host). In principle being a 'little Arduino' with just fewer pins, at least on OS X they seem to like to act up. At least in my hands and on my systems (OS X Mavericks, on a 2012 iMac and a 2009 Powerbook), uploading a program is a little bit hit or miss, often requiring the reboot of the entire system. So if it works - great. But if it doesn't, they can be a pain in the neck.

We're sorry to hear you had trouble with them on your Macs - other than some issues with USB 3.0 ports - they should work great on a Mac, they were even developed on one! We have tens of thousands of Mac users who don't have any issues like this. I hope you'll give us a chance to help you troubleshoot these issues either on our forums at digistump.com/board or by email support at digistump dot com

Thanks for your support!

Arduino programming for $8.95 in the size of a square inch

Many times, utilizing a full Arduino Uno (or even the Uno's ATMEGA chip, the 328) is overkill for simple projects. The Digispark is a fantastic addition to the Arduino environment for this arena. I've built a simple RGB fader and a status bar using Adafruit's NeoPixel products with great success. I have ordered 3 more to keep me busy over the holidays and can't wait to cook up some fun automated goodness for the office. Thanks to the Digistump team for a brilliant product.

Thanks for the review and your support! We're glad you are enjoying your Digisparks!

I use it for making my Neon sculptures interactive.
A quick mod of the RGB driver to drive 4 channels in PWM and I can control Tech22 Neon Transformers - fading and on/off control.
As well as the ability to add interaction by watching for IR signals (IR shield) or other inputs - easily configured. Lets me build all kinds of interactive devices. The relay shield is excellent for controlling mains voltage extras like Xmas tree lights.

Very happy with this product and its price point.
The 6 pins are adequate for most of my needs (without the extra memory or I/O pins available using the expansion shields)

Thanks for the kind words - lots of little interactive devices is exactly why we designed these - glad you are enjoying them!

So small I could forget it's plug in my computer but even for a small size it punch the power you need. Great product very clever for starting in arduino and not expensive at all and the best is you don't need anything to program it! Awesome!

Thanks glad you like it! Watch for the Digispark Pro coming in Feb 2014 - with more pins and a wifi shield!