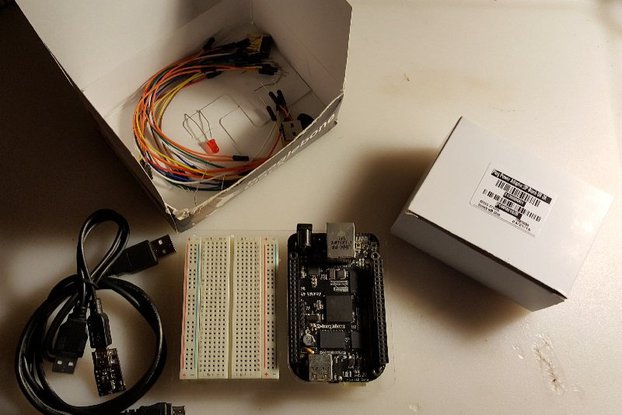 IT & storage systems admin by day, microcontroller hobbyist by night.

Thanks for the great bargain on a BeagleBoneBlack plus some great accessories! I've got the board up and running with Machinekit and I couldn't be happier.

The product works and is good

The product works as specified, compact and what I needed. Spirilis is an influentially good voice on 43oh.com, but if he does not respond to you on Tindie, bother him there.

This is a cool device that enables a console window to be open all the time. I like the friction fit and it angles just right for the usb cable to clear everything on the beaglebone black.

I'd hoped my BBB would be "plug-and-play", but my karma seems to be "learn all the gory details". Since seeing the boot messages is essential to solving problems, I'm resigned to having the debug port readily accessible. This little adapter is ever so much handier than any other solution I've seen. Mostly I just leave it in place, it doesn't interfere with any BBB features. If I do need it removed, it just lifts off.

The first cable that came with it was intermittent, so I had the opportunity to learn all about the adapter and its FTDI chip. The design is simple and solid, and drivers are built into recent Windows and Linux versions. (My old Ubuntu Intrepid netbook handles older FTDI chips but not this one.) I found another cable and it has worked great since. When I reported this, the maker sent me three more cables!

But today I discovered a new "feature" of the BBB. I'm booting from the uSD, so I have to hold the boot switch while connecting power. This had been working fine with no debug cable, or with my heavy-duty Motorola cable made for cellphone charging abuse. But with the furnished tiny flexible cable, the communication totally failed. I'd verify with my scope that the port was open and the USB communicating, but when I'd plug in the BBB power the FDTI chip would disconnect completely.

Long story short, I live off-grid. My computer runs from a DC "auto-air" adapter that grounds it to my DC system ground. The BBB runs from its own non-isolated DC-DC converter based on the same ground. But when you plug in the power connector to the BBB, the positive side makes contact long before the negative ground. So the board is momentarily grounded through the USB cable, and the tiny cable allows the FTDI chip's ground to rise about 1.4V above the computer ground. The FTDI chip shuts down. With my Moto cable, the ground only rises about 0.7V, and communication survives.

I wonder how many of the BBB power-up issues are aggravated by the +5V touching first?

Thanks Loren! I think as a stop-gap some sort of USB breakout board in the middle could help by limiting the ramp-up of the 5V rail or allowing the user to switch the 5V rail on/off. Something to think about or work on in the future!
× Cookies help us deliver our services. By using our services, you agree to our use of cookies. Learn more.
Log in with Facebook
Log in with HACKADAY.IO
Forgot Password?
Register with Facebook
Register with HACKADAY.IO