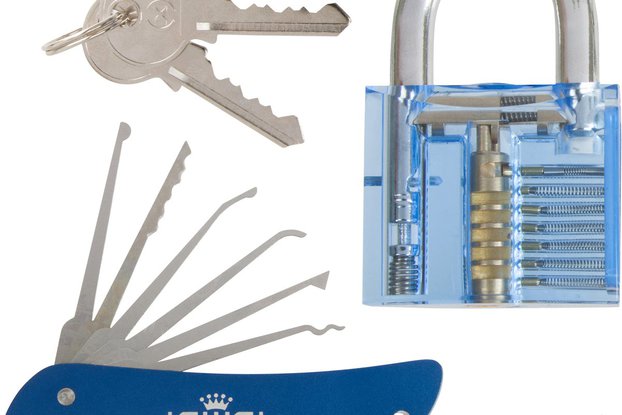 GPS Rocks! I started the www.SmokingResistor.com website as a hobby to build an ultra lightweight GPS receiver. I'm continuing my focus on small lightweight designs but have started to add small break-out boards and GPS loggers for others who are interested.

Pretty sweet. Is what you would expect. Nice package!

Comes in a sturdy plastic case suitable for travel and/or storage.
construction is great. You can see what you're doing with the practice lock as you would expect.
No documentation in mine, but w/e. You know what you have.

I got this as a birthday present for Dad. He already had a set of lock picks, but including a set with the lock was a nice touch. He likes teaching/explaining things, so this was the perfect gift and he loved it! The lock picking ebook that comes is amazing. My one complaint is that the foam that goes in the plastic case deteriorated somewhat. I didn't have much communication with the seller and didn't need any, but a rating is required, so I put one in for that category.

Shipped quickly to Israel, well packed. The product designed nicely, the assembly could be little be better but is good enough. Works perfectly with SkyTraq testing software.

For faster FTDI through output change the latency timer from 16 to 1 in advanced properties of the USB FTDI com port.
Will be happy for firmware that supports GLONASS.

I'm using it with https://www.tindie.com/products/jimparis/microftx-usb-serial-breakout-1/

The windows program is lame but usable and let me set things up, but I have 50Hz, it locked on fast (though a baidu sat came up once), and works.

Venus8 seems not to like all things for Venus6, so some of my other utilities don't work (there is a new rom agps method).

The board is 4 stars of 5. First, the layout could be a bit better - I was using jumpers for 3 pins to the microserial above but had to jump over the 3.3v. The SDA/SCL aren't used but are in the middle, not on the end or side. It isn't Arduino serial pinout. It has a power LED but one on the PPS would be welcome. It doesn't have an easy way of adding a bigger cap or backup battery. As a plus, it is very compact.

These are minor and it is unbeatable given the rate and price.

TECH NOTES - the GLONASS firmware doesn't seem to work - I just get errors, but the default is the other bin file.
The software shows GPS PRN 51 in "Beidou", but it is really WAAS PRN-138 (135 should be reported as 48 but never seems to appear, and 133 as 46, correctly). Note an update to the Windows software that fixes this should be available shortly.
QZSS PRN 193 is found if enabled and you are far enough west.
AGPS upload only worked with the "new rom method". It supposedly uses the Eph4.dat file.
Some things are NACKed - not supported by the firmware.
50Hz GPS does work at 115200 baud but seems to stress the USB driver, I get large blobs, whereas at 912600 the display is smooth. I'm not missing any bytes, only that it seems to be sent in larger clumps, at least under windows. This is with the FTDI.