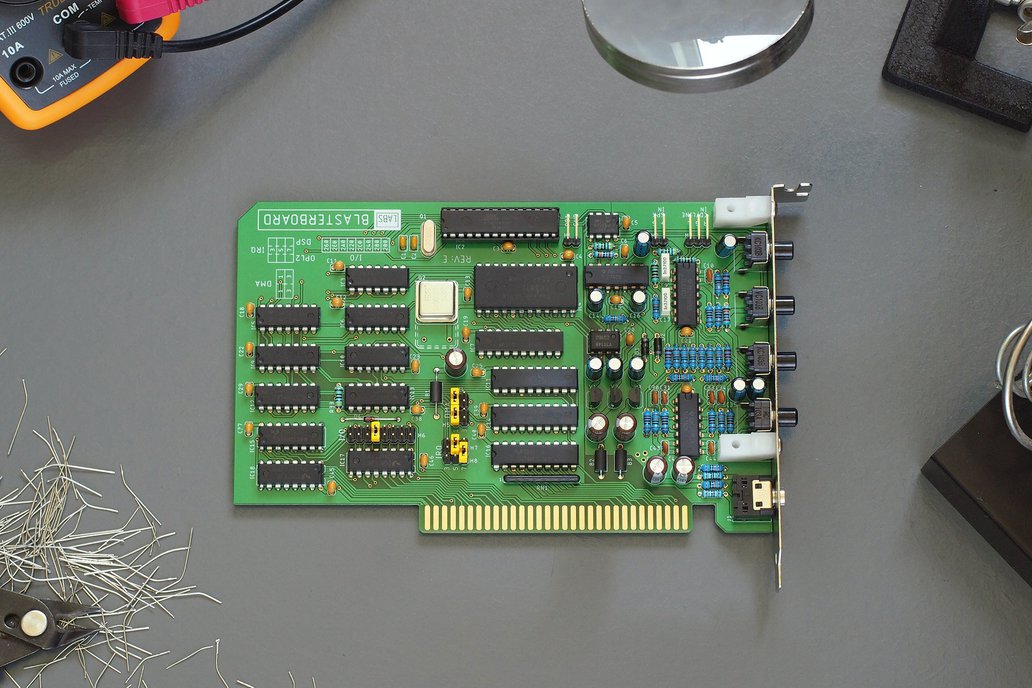 Currently shipping revision F boards. Please use corresponding assembly manual by following 'Documentation' link below. What is Blasterboard? Blasterboard is an open-firmware ISA sound card for PC or…

Blasterboard is an open-firmware ISA sound card for PC or compatible retro computers running DOS. The card is software compatible with Sound Blaster 2.0 and integrates high quality low noise audio path. It is capable of 8-bit mono digital sound playback in PCM and ADPCM formats, FM music playback via OPL2 chip, PC-Speaker playback and CD Audio playback using dedicated onboard connectors. Its CD Audio input connector can also be used as a line input for connecting any other sound hardware such as MIDI sound module. The card has 4-channel low noise analog mixer onboard with individual volume controls for all sound sources above, which provides about -94dB RMS noise floor.

Blasterboard is available in a DIY kit form or as a fully assembled and tested card.

There are 3 DIY kit options available (see pictures above):

Kit 0 is the minimal kit, which contains a PCB, custom made ISA bracket, mounting kit for the bracket and 2 wires for connecting CD audio and a PC-Speaker.

The rest of the components are just a handful of common components like resistors, caps, diodes, logic chips, etc and thus are not included in any of the kits.

A full list of required components can be found in the assembly manual (see 'Documentation' link below).

My initial idea was to create a sound card using discrete off-the-shelf components to play some games from the past on my ancient 486. This machine had been collecting dust in the attic since the 90s, but after watching some retro gaming videos the nostalgic inspiration grew and I decided to give it a try. It was thoroughly cleaned, powered up and booted into MS-DOS. Some games were still installed on its hard drive, but there was a problem - the machine lacked a sound card. Buying one was not the way I wanted to go, but making one myself from scratch was a real dive into retro computing, so I got to work.

The main goal was to make a low-noise device with simple architecture and features I actually need:

I followed Sound Blaster 2.0 compatibility for its widest support of DOS games and simple design. To make it even simpler I dropped a sound recording ability and a gameport of the original card, but added a PC-Speaker input and a stereo CD/Line input, so the card could support any DOS game that produces any sound at all.

It took me about a month of intensive work before I was able to hear a legible PCM sound coming from the speakers. Despite it being just a heap of breadboards and wires, the excitement of hearing an explosion sound of the Duke Nukem 3D logo was over the top! 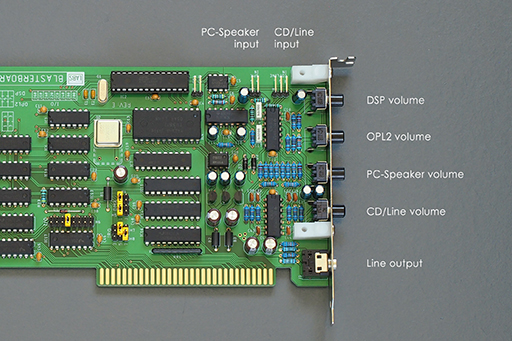 At the end I came up with a neat looking sound card that answers the most DOS sound demands: CD audio, FM music, digital sound effects and PC-Speaker summed up to a single low-noise audio output. It can be connected to a nice sound system or headphones without introducing unwanted noise, which was so common for mass-produced sound cards from the DOS era.

The card's digital circuit uses discreet 74HC-series logic ICs. 8-bit sample playback is handled by Atmega MCU and MCP4901 DAC. Sample rates from 4kHz up to 62.5kHz are supported as well as ADPCM sample playback. Genuine Yamaha YM3812 (OPL2) chip and its DAC Y3014B are responsible for FM music playback. Stereo CD/Line input uses a noise cancellation circuit to reduce PC noise as much as possible, so the final signal is clean even on maximum volume.

All above signals go to the onboard mixer and are adjustable individually using 4 dedicated volume knobs from the back plane.

Card's output is a standard stereo mini jack connector. The output gives a loud and clean signal which is above the line-level at its maximum and also handles direct headphones connection.

*It is possible to select IRQ for the OPL2 chip. This option adds two extra hardware timers to a system. But since it was absent on the original SB card, it is not supported by any software I know. It is here mostly for custom experiments, so can be skipped during regular operation.

The card is intended to run perfectly on all PC or compatible retro systems. Please keep in mind that on faster machines (Pentiums and up) it will behave as the original SB 2.0 - some known games that are not intended for such CPUs may have a distorted sound or no sound at all. However, Blasterboard is more tolerant to faster machines than SB. Such picky ones as, for example, "Alone In The Dark" in DMA-mode or "Crystal" demo run perfectly on  Pentium 166 MMX with Blasterboard, but failed to make any sound on the original SB 2.0 on the same machine.

I hope that Blasterboard will find its place in your retro PC system and you will enjoy building and using it as I did during its development.

Enter your email address if you'd like to be notified when Blasterboard - a complete 8-bit ISA sound card can be shipped to you:

Thanks for your review and happy building!

Great package, but... where is the assembly notice ?

Hi,
The kit arrived very quickly. By the way it was very well protected in its package box and bubble wrap.

One thing seems missing though, or I least I could not find it : Where is the assembly notice ?

Nothing much to say. I'm looking forward to take time to solder it and use it.

Hi, thanks for your review.
The github link indeed became broken somehow, but now it is updated. Thanks for pointing that out. You can find it on the bottom of the product page following the "Documentation" link.
Regards.
Eugene. 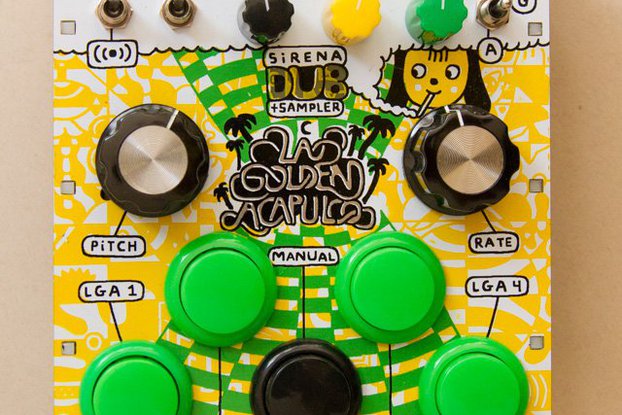 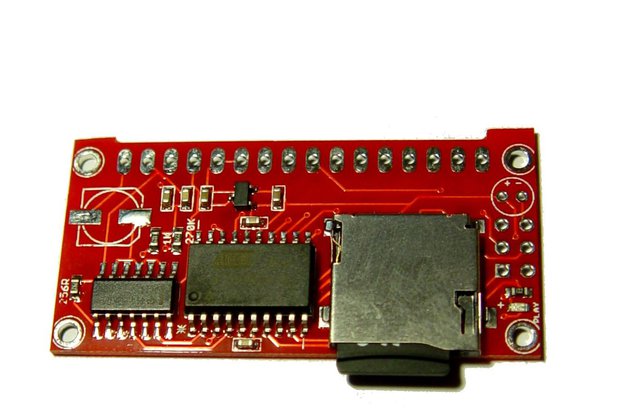 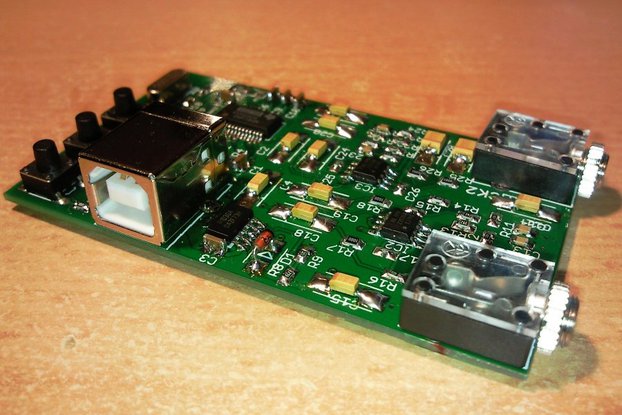